Here’s a few of our members with their electric vehicles along with their own words on how and why they chose to make the switch to drive electric. 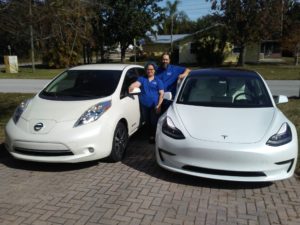 We have been fascinated with the idea of electric vehicles for years, so when the time came to replace Brandon’s car, we were thrilled to find that a late-model, low-mileage Nissan Leaf with great features was within our budget and had enough range for his commute and other around-town driving.  A little over a year later, we took the plunge on a new Tesla Model 3, in no small part so Brandon could indulge his laziness with the car’s steadily-improving self-driving features!  These cars are great steps toward a more sustainable lifestyle, plus they’re just so cool and fun to drive.  Next up, a hybrid – or maybe full-electric – mini-van that can carry the whole family! 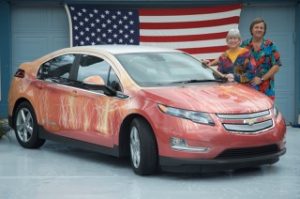 We’ve been in love with the idea of electric cars for as long as we can remember. We’ve been teased by “futuristic” EVs in science fiction movies and books and concept cars at auto shows all our lives. What’s cooler than a car that glides along silently with no cloud of stink — and instant, massive power? Most importantly though, is that we’ve known for years that we must reduce our emissions, and our dependence on fossil fuels to save our home
– Planet Earth.
When GM rolled-out the EV-1, we thought: how cool! But they never left California. When Toyota introduced the Gen 1 Prius, we test drove it, and as soon as the Gen 2 Prius was released, we rushed to the dealer to make our deposit, and (after a short wait) were rewarded to get one of the first mass-production electrified cars on the Space Coast! We were hooked! After 15 years and 217 thousand miles, we’re still in love with it.
We began making “EV fuel” at our home in 2008, with the installation of a 2.9 kW solar array on our home. Phil installed the EVSE (“EV fuel pump”) in our garage just before we ordered our car. The stage was set!
We were thrilled when Tesla began producing the Roadster, and Nissan released the Leaf, and Chevy started cranking out the Volt. Our dreams were becoming reality. After our retirement in 2012 and 2013, we knew that it was time to buy a real EV of our own. Before buying, we joined the Central Florida Electric Vehicle Association (Electric Automobile Association), and
Phil volunteered to serve as Treasurer. We got to see and feel a small selection of EVs at the 2013 National Drive Electric Week EVent in Orlando. It was obvious that the Chevy Volt was going to be the perfect car for us.
We ordered a 2014 Volt from Bob Steel Chevrolet in December of 2013, but we knew that we wanted to do something with it that screamed “I’M ELECTRIC!”, so we decided to have the car wrapped with the best lightning photo that we could find. After much searching, we found a wonderful time lapse sunset lightning shot by a skilled Greek landscape photographer. We
contracted with a local graphics shop (“Graphic Details”) to use the inspirational lighting photo to create a 3M wrap that would make our new Volt look absolutely shocking!
Since every EV deserves a proper name of its own, we named our car: “Bolt” — in honor of the lightning bolts that embrace it’s skin, and the heroic Disney dog that smiles up from his hind quarters. Bolt was the best Christmas present that we could ever hope for!
Early in 2014, we drove Bolt to the Brevard Zoo for a visit, where we met an impressive young couple, who had set up a tent and table in front of the zoo’s entrance. It was Josh and Brenna — kindred spirits — who were proudly showing their beautiful Volt, and encouraging visitors to join their new group: The Space Coast EV Drivers. We said: “Absolutely YES —
Please sign us up!”, and we became the first members, after the founders, of course. We stayed with Josh and Brenna all day, and skipped the zoo visit.
In the years since, we have been proud to promote electric vehicles with our growing band of EV Drivers, here on the Space Coast and beyond. This has been such a wonderful chapter in our lives! Our EV honeymoon has never ended. In fact, our love of electric transportation has grown over the years, and it is a joy to share the excitement, fun, and satisfaction of driving electric! We’re changing the world – one car (truck, bike, plane, train or vessel) at a time. 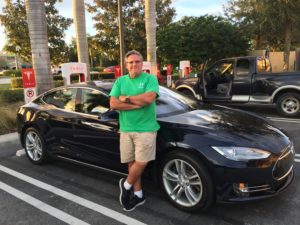 The reason I own and drive an EV is simply stated. I’m the type of person who embraces new technologies. In the case of electric cars …… they have been reintroduced using modern electric motors, superior battery design coupled with contemporary electronic control systems. Also, I like the possibility of using electrical energy derived from renewable sources to power my home and car. We all need to look for ways to minimize environmental impact, obviously personal transportation systems are a good place to start. 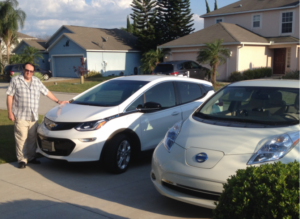 I converted my first pickup truck to electric in 1979. It was a 1972 Datsun. After viewing the movie “Who Killed The Electric Car?”, I was moved to buy my 1999 Ford Ranger and convert it to a battery electric vehicle in 2007. After placing my $99 reservation April 19, 2010 we received our first production electric car from Hill Nissan in Winter Haven, Florida on December 15, 2011. It was worth the wait. As my Ranger, after six years, was in need of a new battery pack, and since the field of production electric cars was widening I decided not to invest more in the truck and buy a production EV. With the help of some friends, I found a used RAV4-EV at Downtown Toyota in Los Angeles in November of 2013. I was planning a Florida to New York road trip on the auto train in the RAV4-EV when I attended an event at Maher Chevrolet in St. Petersburg, Florida. My initial reaction was it was a great car but I had no intention of trading my RAV4-EV at that time. As I continued planning my New York trip of about 1,600 miles of driving, I could see that the trip would be much easier in the Bolt. After much soul searching, on April 3, 2017 I went back to St. Petersburg and purchased the Bolt LT. 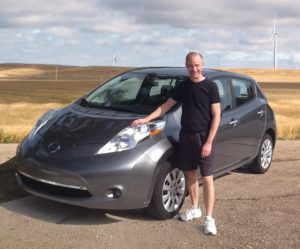 I am very passionate about EVs. They are cleaner, quieter, and save you money in every aspect of their operation. I want to help educate as many people as possible about EVs and other money saving ideas that happen to be greener too. I love it so much, I would love to make this a career.
We purchased the 2014 Leaf S because neither my wife or I drive over the range of the car in a day. If you are married, and this is true to you, buy an EV. If not, buy a Chevy Volt because it is EV first, then has a gas generator to charge the batteries. Less parts to fail than a hybrid with a gas motor and transmission. 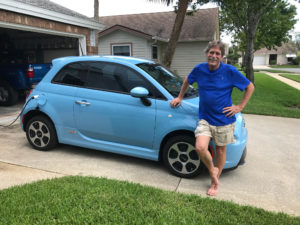 Although I’ve been enamored with electric cars since Santa dropped off a slot car set on my sixth Christmas, it wasn’t till Jan. 2017 that I finally managed to acquire my 2015 Fiat 500e EV. I joined the club very early in the club’s life even though I hadn’t bought a car yet. Everyone welcomed me with open arms as month after month went by without me actually driving an EV. After being thwarted by one issue or another while trying to buy a Ford Focus electric, I took the advice of a club member and did another search for a 500e. To my surprise there were some available in Florida. With more frustration of finding a decent car at a decent price and a decent loan rate and a decent color, it all came together. I found a near perfect car with 18k miles for $7999 and got a cheap loan.
Finally, life is good. I’ve driven as many as 250 miles in a day and could have easily done more as I wasted possible charging time. It’s a well balanced car and a hoot to drive.

Don’t wait to make the move to an EV! 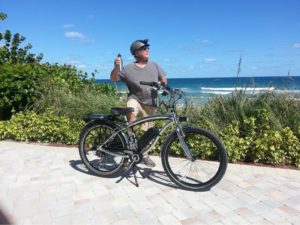 I converted this bike so that I, as a sufferer of COPD, could still get out and about for the simple pleasure of a comfortable ride with the as-needed assistance of the electric motor. The concept for design was to maintain clean beach cruiser/retro appearance. This was accomplished by incorporating a programmable “Golden Motor kit” and a 48 volt 12 amp hour lithium battery pack and of course a large cushy seat. This has resulted in a bicycle that is strong enough to handle our causeways with ease while maintaining a decent range of 22 miles or more. 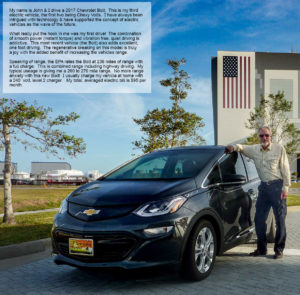 My name is John and I drive a 2017 Chevrolet Bolt. This is my third electric vehicle, the other two being Chevy Volts. I have always been intrigued with technology and have supported the concept of electric vehicles as the wave of the future. What really put the hook in me was my first drive! The combination of smooth power (instant torque) and vibration free, quiet driving is addictive. This most recent vehicle (the Bolt) also adds excellent, one foot driving. The regenerative braking on this model is truly a joy with the added benefit of increasing the vehicle’s range.
Speaking of range, the EPA rates the Bolt at 238 miles of range  with a full charge. This is combined range including highway driving. My typical usage is giving me a 260-270 mile range. No more range anxiety with this new Bolt! I usually charge my Bolt at home with a 240 volt, level 2 charger. My total, averaged electric bill is $95 per month. 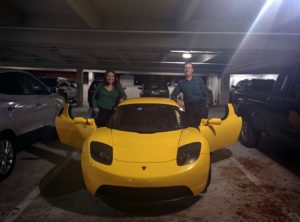 My wife and I were in Fremont visiting family in 2010.  I had read about the Tesla Roadster and was mildly curious.  There were only a handful of them around at the time, and dealers were even more scarce.  After an exhilarating test drive I was impressed with its acceleration, smoothness, ease of driving and ownership, and range.  I realized that this was the future and knew we would be getting one in the not-to-distant future.
Later that year, Tesla called me at home asking if my wife would like a chance to drive one (they were delivering one from Dania Beach – the only Tesla dealership in the Southeast! and would be coming near the house.)  After her drive, my wife’s grin sealed the deal.  We bought one and began our Tesla relationship that we plan to continue for the foreseeable future.
We have solar panels on our roof which have reduced our electric bill by over $200/month (our average has been $41/month for over four years.)  We pay less for the electricity that powers our house and car than most people pay for just their gasoline!  The panels paid for themselves in the first two years and have generated an additional $5,000 in free electricity without incident or expense since.
I belong to the Space Coast Electric Vehicle Driver’s Club because I enjoy meeting with people who range from curious to skeptical about alternative energy and electric cars.  I feel that our club and its members really do make a difference in educating and spreading the word.